What a surprise for us when we arrived in Norway to find out the Tall Ships Races 2014 were in Bergen and the festival was in full swing at the wharf!

There were so many unique sailing ships from all over the world.  It was not only breathtaking but spectacular.  We loved it!

The historic wharf was such a beautiful back drop to the festival.  The colors and smells of the open market with mouthwatering seafood only added to the senses.

We weren't expecting the festival since we were mainly in Norway to visit relatives of my husband that he had not seen since he was a young child.  Our cousins were our tour guides and we pretty much left it up to them on the sights that we would see.  I have to say they were the best ever and for that we are truly grateful.

Day one off the plane was probably the longest day of my life.  No, literally!  We stayed awake except for a quick nap that I took when my eyes would no longer stay open from the jet lag.  I had no experience in jet lag since I had never been abroad before.  It was my first time.  Daylight seemed to last forever especially being in Norway at the end of July and first week of August!

We also stopped at an Irish Pub that was in full swing in the heart of the historic area later in the afternoon.  I have to admit though I was especially elated earlier in the day to find my Starbucks among the historic buildings at the festival.  The triple caramel macchiato really helped keep me awake.  When I calculated the cost from kroners to dollars I realized my $5 cup of joe at home was not too unreasonable in comparison! We also bought many collector cups to take home with us for gifts. When people found out we were going to Norway the first thing asked was, "Can you pick up a few collector coffee cups from Starbucks and a few troll magnets!"  Well, I never.......

Anyway, back to the Festival.  I recommend it to everyone.  You don't want to miss it!  They go to different ports every year so when you visit Europe look it up and see if they will be near you!  I have attached some of the sailing ship pictures to this post.  We took so many pictures and will cherish them for years to come.

Happy Travels to you all! 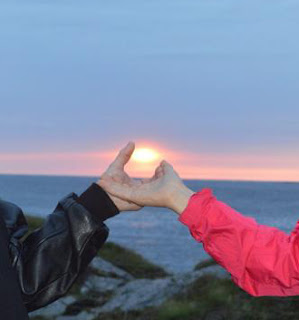